A Japanese assisted bicycle that can run without batteries? “Freepower” 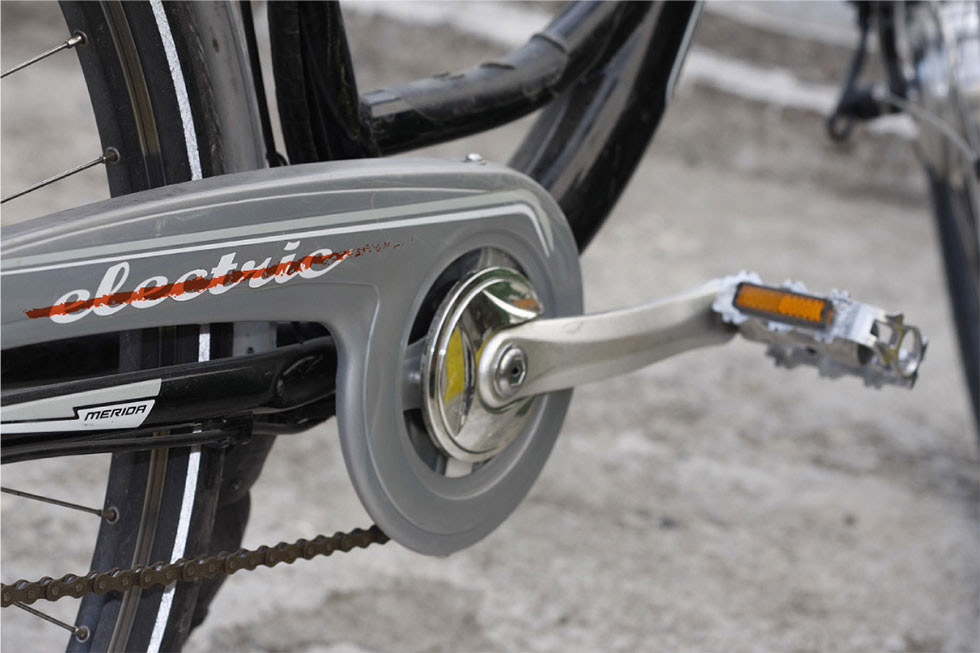 I have a first question, do you know battery-less assisted bicycles?
Those who know this product know, but most people think, “There is no bicycle that can assist without a battery.”

It’s surprising for those who don’t know. but, this is not a lie and joke.
It was in 2018 that this battery-less assisted bicycle was featured in Japanese media and became a hot topic. So recent story.

This time, I will explain this assisted bicycle that does not require an electric battery, based on the information I have examined.

What is a assisted bicycle without battery?

I wonder what kind of assisted bicycle without “Electric motor” is. When I first heard about this product on the news and Internet information sites, I thought it was an innovative product.

What is different from electric assist bicycle? How comfortable is it? How much is the price? How safe is it? There are many unknown points such as.
First, I will explain the groundbreaking product names and basics.

The basics of “free power assist system”, a new sense of power!

A assist bicycle without battery, Its name is called Free Power.
This product was developed by Free Power Co. Ltd. and is now sold by its distributor, Cycle Olympics.

This Free Power is a product made in Japan.

This is the world’s first battery-less bicycle assist system that uses silicone inside the bicycle’s pedal gear!

However, there are many people who think, “I found it don’t need a battery, but I don’t know about silicone.” Let’s take a closer look at why it’s groundbreaking and why it’s so gain empathy.

First of all, “free power” is the assist gear (crank gear) part that is attached to the gear part of the bicycle pedal. Some are sold as attached to bicycle, and some can be conditionally attached to existing bicycle.

The mechanism of “freepower” is that when the pedal is depressed, the built-in silicone is compressed, and the repulsive force is transmitted to the chain, resulting in assistance. 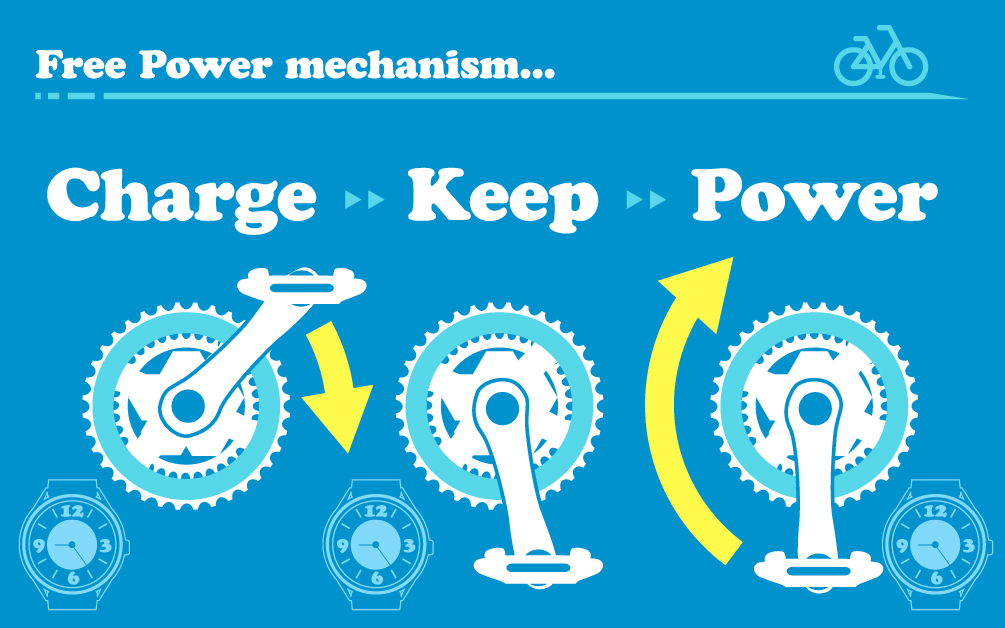 It may be a bit difficult to understand, but as shown in the figure above, the range between 12:00 and 6 o’clock will be subject to foot pressure. However, the power of the foot is hardly transmitted from 6:00 to 12:00. If you are riding a steep slope on a bicycle, I think so it will be easier to understand.

This “Free power” has achieved comfortable assist driving by using the repulsion force of silicone from 6:00 to 11:00 in the empty.

How much assist driving is possible? What is the ability of “freepower”?…

Next is the actual assist performance of the basic structure of free power. Here are introduce the general characteristics of using a bicycle with “freepower”, such as how much assisting and accelerating power you have while riding a bicycle.

As a result of a running test conducted by a manufacturer with a bicycle without Freepower (FG-1) and a bicycle with Free power, it is found that there is a difference in acceleration of about 20% or more. Since the burden on the feet during driving is also reduced, long-distance running and gentle slopes can be done comfortably and a comfortable bicycle run can be realized.

As a result, the burden on the muscles such as the knees will be reduced, so it can be reassured for elderly people and those who are not confident in their legs and hips.

We understood the structure, and features of “free power”, but I’m curious what’s different when compared to electric assist bicycles. The following summarizes the main benefits of “free power”.

This “freepower” can be attached and purchased for around 10,000 yen. Bicycles already equipped with “freepower” are also on sale, and these are priced at around 40,000 to 50,000 yen.

It’s less than half the price of an electric assist bicycle, so it feels cheap.

No need to charge and no battery removal

With an electrically assisted bicycle, it takes time to charge the battery or remove it from the bicycle, right?

Since the “freepower” is not electric, there is no such trouble after attaching to the gear part.

However, “FREEPOWER” also has a life span, and as the years of use elapse, the silicon assist gear power decreases. I want to be careful because it is not a permanent one.

Are there still few dealers? Disadvantages of “FREEPOWER”

The “freepower” of the assist gear system has advantages, but it has its disadvantages.

The freepower was featured in the media around 2018 and continues to be in the spotlight because of its novelty and high quality, but its stores are mainly located in the Kanto region and are not located all over Japan.

It is a pity that the agency store are limited because “free power” can only be attached by specialty store or agency.

There is no special mail order site, so if you want to attached “freepower” your bicycle, you need to go to an agency directly.
The disadvantages of “free power” are summarized below.

Basically, it is compatible with all bicycle models, but …

It is described that “free-power” can be installed all types of bicycles, but not all bicycles are compatible.

It can be mounted on various things such as general bicycle and sports bike types, but it may not be able to be mounted depending on the specifications of the bicycle gear part.

To determine whether “freepower” can be attached, it is necessary to contact a distributor directly or bring a bicycle.

Is it necessary to test drive if installing “free-power” your bicycle? Recommended Reasons

Although not a drawback, it is highly recommended that you test drive on a “free-power” bicycle.

FreePower uses the resilience of the built-in silicon to create a bicycle gear assist system. There are three types of silicon: soft, medium, and hard. So-called “hardness” of silicon.

From these three types of silicon, you can test drive and choose which type fits you best. You might think, “if you choose the hardware that has the most propulsion, isn’t it okay?” But it’s not that easy.

The power to press the pedal due to the muscle mass of the legs and the strength of the legs, of course, varies from person to person. If the person’s leg strength and pedaling power do not match the silicon type, the original assist power of freePower will not be able to be exerted well, and in some cases the running performance will be poor.

For freePower, we recommend a test drive for this reason.

Will you lose to an electric assist bicycle depending on the degree of the slope?

Regarding driving on steep hills, the opinion of those actually riding is inferior to electric assist bicycles.

The electrically assisted bicycle is “a bicycle that assists by a electric motor that is detected by a sensor at the same time as pedaling”, while the “freepower” is “a function that converts the pedaling out force into silicon repulsion and assists” is.

As you can see from this difference, if you stop in the middle on a the way uphill by bicycle with attached “freepower”, the first pedaling will take a burden.

However, these cannot be said unconditionally because there are individual differences such as the angle of the slope and the leg strength at that time. In any case, it is best to go to an agency or the like to test drive.

If you would like to take a test ride at this opportunity, please check the official site of Free Power by all means on details etc!
Free Power official site

How to buy “freepower”? Started handling in Nara and Kyoto etc

So far we have introduced the structure and features of “free power”, as well as the advantages and disadvantages. I think someone want to test drive with bicycle attached “freepower”.

This”free power” is gradually expanding its sales channels in Japan.

“Freepower” is being gradually handled at the “Champion Jitenshakan” in the Kansai region. Cost can be attached from 13,750 yen. Free-power test rides are also available.

If you live in the Kansai area, such as Nara Prefecture or Kyoto, and are interested in “free power”, why not visit it?

This time, I introduced the free power of the bicycle assist system! How was it this time? The biggest advantage is that it can be attached on existing bicycles, and need not battery.

If you are a new bicycle that has just been purchased, you would like to use “freepower” at this opportunity. This product is highly recommended for the elderly and those who usually use bicycles!